Be Strong, Be Strengthened Warrior

Movies and TV series force feed us violence at unprecedented levels these days. I know Game of Thrones has had all kinds of controversy within the church because they blatantly show some boobies – but the level of violent display goes all the way to eleven. If you watched it (and I’m not saying you should or shouldn’t have) consider the feeling you felt when that hated character of Joffrey got what was coming to him. The feeling of elation at the violent death of a character you have been led to despise – it is a toxic formula for your heart. The worse a bad guy is in a movie, the more you look forward to the spectacular death that awaits them. Sure this has a word to us about justice, and who can fault anyone for upholding a thing like that, but it also generates a blood frenzy within our hearts that does not belong alongside the mind of the one following after Christ.
Just as porn takes a healthy masculine desire (sex) and twists it into a thing pernicious, so does extreme consumer violence take a healthy masculine impulse and buckles it into abuse and cruelty and bloodlust. That impulse is warriorship. 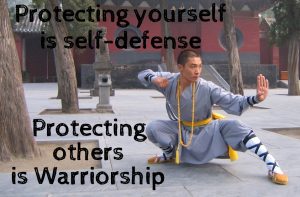 “Protecting yourself is self-defense. Protecting others is warriorship.”