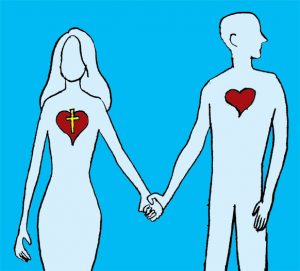 QUESTION: I’ve been dating a guy for over two years now.  He feels like the man I’m supposed to marry. The issue is, when we got together, we were both atheists. Now I’m a Christian. So I’m not sure what to do. I feel no conviction to leave him, especially since our meeting seemed so providential.  But I also know that the Bible commands us to not be unequally yolked.  I’m really confused. I’ve tried to talk to God about this but he hasn’t yet given me any clear sign about what to do.

ANSWER:  Thanks for your question. You’re certainly not the first Christian to run into the conflict of “love versus religion.”

First, you’re not married to your boyfriend yet, so you have time to work this out. However, as you say, you are not just idly dating for fun and games, you are actively thinking about the future and a marriage partner, and that is a mature way to look at dating. So it’s smart to look down the road now, before rings get on fingers, and wonder about potential issues from the spiritual mismatch you currently have.
Secondly, this issue is bringing before you the even larger issue of how you hear from God and find his will for your life.  In this case, you seem to be clear about the guiding biblical principle, but you are looking for an inner, personal leading from the Holy Spirit to confirm or negate this principle for you.
But do you need such inner prompting? The issue is a good one for your future discipleship in many areas, not just this one: how should Scripture should inform our discipleship?
The way to look at it is that if God has already spoken on a subject, and I’m waiting around for him to give me an inner prompting to confirm, I’m not really trusting Him.  I always say to people, if we are waiting for God to speak to us, just know he’s not going to contradict himself, and give you a private nudge in contradiction to his explicitly given Word.
Now, I realize that finding the explicit direction from the explicit Word is not always easy.  But on this question, I think that moral guidance is clear:  God’s perfect will is that Christians share a common spiritual foundation and Christian worldview with their spouses.

Most Christians will quote the verse you’re alluding to, to establish this:

2 Cor 6:14-15: Don’t team up with those who are unbelievers. How can righteousness be a partner with wickedness? How can light live with darkness?

This probably applies to marriage, but many people I’ve talked to point out that the context does not talk explicitly about marriage.  It’s broader than that.  True enough. So can we establish that God’s mind on this is clearly that Christians ought not to marry non-Christians? Yes, I think we can.

In two other ways. First, this is guidance inside of the Mosaic command (Deut 7:3-4) “Do not intermarry with them. Do not give your daughters to their sons or take their daughters for your sons.” This had nothing to do with racism, as many claim. It had to do with the potential falling away from true Faith that might come from a spiritual mismatch, as Moses makes clear in the very next verse: “…because they will turn your sons away from Me to worship other gods.”

Second, turning to another passage in the New Testament that is explicitly about marriage, Paul says to single women:

Meaning clearly that when we have a choice who we marry, we must marry “in the Lord” – another Christian.

Now, there are those situations when you don’t have a choice to be married in the Lord – like if you and your boyfriend had gotten married when you both were far from God, and then you turned to Jesus, God would still want you together, for sure.  (This is assuming he didn’t want to leave you after your conversion.)  But you are not married, and you do have a choice.

I know this might be hard to hear, but I do think the moral principle for disciples is that when they can, they marry a fellow believer, someone who shares their devotion to Jesus and his Kingdom.

Maybe it would help you to know WHY God would repeatedly come back to this idea.  The reasons, which I’ll get to below, will stack up more later in marriage than they do now.  Now, in the flush of young love, you can imagine your compatibility on all the other stuff, your mutual attraction overcoming all.  And maybe, I dare say, you hold out the hope that your boyfriend comes to Christ – maybe through your influence.

I don’t deny this has happened many times, I know several Christians who came to faith after their marriage and through their Christian spouse.

But those examples of success in winning over a non-Christian spouse don’t overturn the reasons for the rule to not marry one if we have the choice. Paul will talk to disciples married to non-Christians who are intent on leaving the Christian because of the spiritual mismatch. To the Christian who is determined to fight to keep them from leaving precisely because they might be the way they get converted to Jesus, Paul says “let them leave”, adding:

So the hope of conversion, though real, is not enough to overturn the concern the Scripture has for marriages that share the beauty and goodness of a common spiritual foundation in Christ.

Back to the reasons:

One, when children come along, the blueprint for how they ought to be raised will be a source of constant tension. Not only that, the children will also be far more apt for spiritual confusion if one parent thinks Christianity is simply false.  Hiding that secret contempt for the Faith would be even worse.

Two, the use of family finances is deeply related to worldview and money is already a source of tension in most marriages – spiritual mismatches exacerbate this already contentious area.

Three, the disciple grows deeper in love with Jesus every year, and to not share this most important part of your heart and your values with your spouse becomes a point of deep, deep loneliness.

Four, the disciple needs space and time and freedom to pursue what God wants, and, while the non-Christian can be OK with that, their lack of similar devotion presents a constant negative pressure on the devotion of the believing spouse… Giving, serving, attending church, fellowshipping with other Christians, prioritizing mission, sharing your faith – all this Christian activity is either tolerated (best case) or actively resisted (worst case), making the maturing of the Christian more difficult, for a lifetime.

I don’t think this means you must break up immediately (if you’re not married, you’re not in violation of the biblical principle).  But I do think that this relationship needs to be offered up to God, like Isaac was by Abraham.  Note God’s protective rule and reasons in your mind and heart, and commit today that there will be no future inside of your control, where you will marry someone who doesn’t share your love for Christ.  Then, I would simply pursue Jesus overtly and devotedly – now.  Don’t hide it or put a cap on it to “make him less uncomfortable”.

It’s unfair to you both to cover the issues with a spiritual mismatch now, because they are coming like a freight train later.  So don’t work around them now.  Be you – a disciple of Jesus – fully and without apology.  It goes without saying, I hope, that you walk in Christian chastity as part of that.  Talk about Jesus, about what you’re learning, about what being His means to your heart, to your future, your priorities – without being overbearing of course.

If you do this, I predict one of two things will happen. One, your boyfriend will start to actively wonder (as may you) if compatibility in other areas can overcome lack of compatibility here. The relationship may very naturally unwind.  Let it.  It will still hurt, since you feel so drawn to each other, but God has something better, I assure you!

Or two, your boyfriend may (because of watching you) start to investigate Jesus in a way he never has, and who knows where that might lead!  This hope has to be put below your devotion to Christ, however.  And if the days show no movement here, know that every week and month your hearts become more entwined, the harder it will be to walk out your commitment to Christ’s protective, loving rule: only marry “in the Lord”.

It may be the heart confirmation you’re seeking doesn’t happen until Jesus knows you’re willing to follow his explicit command, wherever. Like Abraham and Isaac, Abe doesn’t get the miracle of God’s comfort until he showed he was willing to follow God’s command all the way.

Putting God at the Center of Our Marriage

Does Being Christian and Gay Require Celibacy?