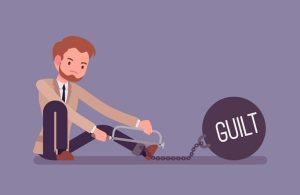 QUESTION:  When I read the Bible at times something’s that I read convict me and I feel sad and I feel that I am letting Christ down by not doing what it says in the Bible.
ANSWER: Thanks for the question.  What you’re struggling with is common to most Christians at one point or another.  In a word, it’s guilt.
Each person, Christian or non-Christian has a sense of being accountable to God for their behavior.  The Christian’s sense of “oughtness” magnifies exponentially as he/she comes under the conviction of the explicit instruction of our Faith for how to live – the black and white guidelines, moral precepts, commandments, in the Bible, on top of the inner voice of the Holy Spirit.

Here’s how I resolve the feelings you’re talking about.  I keep in mind that once I’ve let the moral commandments of the Bible bring me to that place of conviction, that’s about the moment where those same commandments have fulfilled their duty and I need move on to something better.

That better thing, is the Spirit of God inside me.

What I’m referring to you can read for yourself in Romans chapters 1-8 which I’d encourage you to do this week.

To summarize, the Bible says the Law – both the internal law of your conscience and the explicit instructions of the Bible – have not been given to help us feel right with God.  If you look to the rules in the Bible to help you feel good about yourself before God, you’re going to be a mess, because the exact opposite will be the case.  The Law was given to “increase the consciousness of sin.”  (Romans 3:20, 5:20)

You need to hearthat.
The Bible’s moral codes (the Law); that is, the stuff you’re reading in there that you’re supposed to do, but you don’t do perfectly… was not given to absolve your guilt.  It wasn’t given as the path to be acceptable to God.  The law was given to increase your sense of sin – to highlight the truth that you are spiritually dead and fallen out of relationship with God.

Well, guess what?  It sounds like the law has achieved it’s goal in you!  You feel conscious of sin, of letting Christ down.  You are vitally aware that God is holy and you are not, that there are areas where you do not measure up, that you have not done what God has explicitly asked you to do.

OK, the Law’s job is mostly done.
You need something else at that moment:  a reminder of what our Faith in Christ is all about.  It’s not about Law but about Righteousness.  For in Christ the bible says, (Rom 3:21-22) a righteousness from God, apart from law, has been made available.

You must understand that what righteousness means is simple ‘being right’ with God.  If you are righteous then, the relationship with God is fixed.

Permanently.
Absolutely.
Indisputably.
Completely.
He accepts you.  You are friends.  He’s not mad at you anymore.  If you thought you could be right with God by doing all the stuff in the Bible, then you would always remain insecure about your future with God because it depends on your performance.
But if God himself – who holds the moral code in his hand, who Himself gave us the Bible which convicts you so strongly, who is the primary party offended in all our sin – if this God himself declares you “not guilty”, they how can you remain sad any longer?  You’ve been rescued by amazing Love that knows you can’t keep the law, and has decided to carry your debt, pay your wages and declare you “right” through the sacrifice of Christ.

“If God is for us, who can be against us? He who did not spare his own Son, but gave him up for us all — how will he not also, along with him, graciously give us all things? Who will bring any charge against those whom God has chosen? It is God who justifies.”

Are you hearing this?

We’ve received this grace by a humble faith and faith alone.  You didn’t earn this gift.  It’s free.  Now, that doesn’t mean we go about grossly offending God with impunity.  Paul carries on his argument with these words:

In Christ we are called to obedience out of gratitude for the gift we’ve received.  We seek to obey, just like we were seeking to please God before we knew Christ but in a new way:  the way of the Spirit, not the way of the Law.  The Spirit’s way is as a way of saying thank you.  The law’s way is a way of trying to gain favor.

Jesus showed us how this works when he allowed a very notoriously sinful woman to anoint him and fawn over him in front of some religious leaders.  They thought that the way people get right before God is by never doing anything bad, so they were indignant about this display of affection.

But Jesus gave them an illustration… If two people owe a man money and he forgives both debts, who will love the man more?  The one who owed him the most, obviously.  So Jesus points to the woman and says, Luke 7:47

“Therefore, I tell you, her many sins have been forgiven — for she loved much.  But he who has been forgiven little loves little.”

This is Jesus’ way of spelling out how a true Christian must go about their business of obeying God.  It’s a gratitude response of love, not an anxious earning.

So if you as a Christian now fail to obey Christ in a given area, you have not fallen out of relationship with Christ.  Because that relationship wasn’t ever, nor can it ever be sustained by you being good enough.  So get off that works treadmill!  It’s a no win situation, which Paul expounds on Romans 7.  It’s a defeated life of never measuring up.

What you need is grace – in two ways.

First the grace of forgiveness. Ask for it, and receive it whenever you don’t do what Jesus commands, whenever you feel convicted or sad that you sinned and let Christ down.  This is not a surprise to him.  This is why there had to be a cross.  He knows what you’re made of.  But that doesn’t mean he wants you to keep on doing this, because he wants victory for you.  He made you for Freedom and Life!

Second you need the grace of the Holy Spirit inside who now gives new power to help you walk in a new way of life.  Your job is not to beat yourself up over failure, but to daily submit your will and thought processes to the Holy Spirit.

Rom 8:6 says, “the mind of sinful man is death, but the mind controlled by the Spirit is life and peace…”  If you walk in daily moment by moment friendship with the Holy Spirit, as a sort of continual conversation, you will find his power to bring life and peace, more victory and less moments of “letting Christ down.”

Watch out that you don’t become trapped again to a religion of works.   That’s why you turned to Christ in the first place; because you could not measure up on your own.  And one of the things you surrendered was the pride of thinking you could make God happy or love you more by how “good” you were.  Ironically that way of thinking, though filled with deep longing to be “good enough” leads to terrible anxiety and fear and increased sin. How?  Because outwardly might look OK to others, but from God’s perspective, inwardly you’re dying with guilt and fear which are antithetical to the life of Christ.

Leave that whole way of thinking behind and say to yourself I’m an adopted son or daughter.  God is my Father who accepts me.  I AM righteous – it was given to me as a gift, and the law no longer has power over me, to condemn me, because I died to it.  I live now by the Spirit of Christ living in me.  Not perfectly, but more and more as I call on him and submit my will to him.  Use the law only as a clarifier of what God’s will actually is for you – not as a judge over you – and then resolve to live in that will by the power of the Holy Spirit out of pure love and gratitude for his amazing, relentless forgiveness.

“So, my brothers, you also died to the law through the body of Christ, that you might belong to another, to him who was raised from the dead, in order that we might bear fruit to God.”

How To Talk to A Non-Christian about Hell

Isn’t Christianity Just a Crutch for the Weak?

By Works and by Grace? – is the Bible contradictory About Salvation?