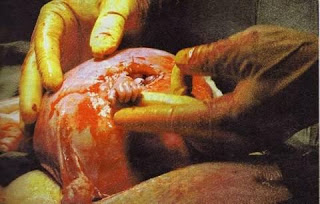 QUESTION: Advocates of Abortion make the case that we only need to consider the freedom, rights and autonomy of the mother because the fetus, might be human but it isn’t really a person.  What do you make of that?

ANSWER: I think the distinction has to be made, because abortion on the face it is inhumane.  Everyone everywhere knows, “I was once a fetus.”  Therefore, we know instinctively the right we grant to end pregnancies is fundamentally granting the right to (hypothetically) end, me.  But I don’t want to be ended, not now, nor even and perhaps especially when I couldn’t resist or express my desire to live, when I was most vulnerable and voiceless.

So abortion apologists have always had to work around that very instinctual, visceral repulsion most have to abortion on demand.  We all know why women and men want to end pregnancies and our hearts go out to them.  Babies can be deeply, profoundly, unwanted, inconvenient, ill-timed, because of the threats a new life poses to physical security, career, romantic interests, financial health, etc.  But to grant a right to end a life during pregnancy even for all these exigencies, requires an argument powerful enough it can overcome that respect for life so deeply embedded in our law, and in our consciences, and in our desire for self preservation.

This supposedly is that powerful argument: that a fetus is not really a person with a right to life.  It may be human, a distinct and unique individual entity, but not a person.  Therefore it can be killed, especially in light of the impacts unwanted pregnancy have on individual women’s lives.  This personhood argument has two advantages. One, it tries to get around the personal empathic response to abortion by saying, you need not identify with the fetus, because the fetus isn’t one of us.  It doesn’t have a will or desires.  It isn’t conscious or sentient like you so there’s no need to imagine yourself as a fetus because it isn’t a “self”.


The second benefit of this argument is that it tries at least, to stay up to speed on the science of fetology.  As I made clear in this post, abortion arguments used to center on the idea that the fetus was an “indeterminate cluster of cells”.  Though this is sometimes repeated today, it rarely is by people in the know, since science tells us abortion is never accurately described as the removal of a “cluster of cells” – in two ways:

First, because all abortions, even the earliest are never done on a fetus during the first month when it is microscopic in size and lacking the basic embryonic shape we’re all familiar with.

Second, because the human embryo is always, from conception on, a differentiated, separate organism, with its own DNA, its own blood type, its own existence.  It is not the woman’s body, it is another body.  A human body; that is exactly like any human body, different only in size, and development.

Ignoring these facts, I saw a meme recently with pictures of an raw egg, an acorn and a silk worm with the tag lines, this is not a Chicken, a Tree and a dress, respectively.  Then the picture of an egg cell with a sperm cell next to it, “this is not a person.”  The level of naivety or intentional ignorance involved in this argument is staggering.  No one makes the argument that an unfertilized egg is a person or even a human!  Show a chick in the shell, or a seedling or a dress in any stage of development and compare to an embryo, and the argument is fairer, but then, of course, the argument falls apart!

But there’s the larger problem.  Obviously, most everyone agrees that the “merely human” fetus turns into a person at some point.  But when?  Even many abortion advocates know that there is no moment post conception that can be pointed to, to mark the dividing line.  Some concepts are thrown out to define personhood, such as “self awareness” and “sentience”, but if these are what makes a person someone with rights, then there are stages and states of adult life where personhood must disappear – can you kill an adult who loses sentience or self awareness or self-consciousness or memory?  But more troubling is simply that these concepts of “personhood” are as absent in babies as they are in fetuses – making them eligible to be killed by the same criteria.

If you think this is a fear mongering tactic, it’s actually a simple assessment of the logical end of the argument for abortion from personhood.  No less a thinker than Princeton bioethics professor Peter Singer has said:

“The liberal search for a morally crucial dividing line between the newborn baby and the fetus has failed to yield any event or stage of development that can bear the weight of separating those with a right to life from those who lack such a right.”

He’s right.  In this way he agrees with pro-life advocates that there is no ontologically significant difference between the fetus and a newborn. True, there are differences of size, location, dependency, and development, but these are morally irrelevant.  I agree.

Human babies are not born self-aware, or capable of grasping that they exist over time. They are not persons.

Accepting that “personhood” is tied to a suite of mental abilities, Singer is forced by implications of that premise to reject birth as a relevant dividing line between person and nonperson.  So, he boldly calls us to lose the taboo against infanticide – a word abortion supporters are usually loathe to use:

“We should certainly put very strict conditions on permissible infanticide, but these conditions might owe more to the effects of infanticide on others than to the intrinsic wrongness of killing an infant.”

In other words, killing babies should have restrictions, but more because of our sentimental attachment to babies, than to the inherent wrongness of the act.  As abhorrent as this may sound, full marks for logical consistency.  Once the value of a human has been reduced to personhood, and personhood has been expanded to a set of traits that bequeath value, this is a rational landing place.

Of course, abortion advocates don’t follow Singer’s logic publicly because it would likely erode public support, to put it mildly.  Already, pro-choice people are rarely fans of abortion, and a majority see their support as something of a Faustian Deal – sell a piece of your soul to get the promised liberation for women and a world of only wanted children. Most want some restrictions on abortion. But I suspect that just behind the rhetoric about wanting abortions “safe legal and rare” and behind the agnosticism about when a fetus becomes a person, lurks Singers utilitarian definition of personhood.

I say this with increased confidence these days, after the recent spate of abortion laws passed to protect and expand abortion “rights”.  No more compromise language in these bills, no more sense of abortion being a “difficult decision between a woman and her doctor” and certainly no thought that a line exists past which it would be morally indefensible to end a pregnancy.  No, these bills have sought to protect the right to kill a fetus up to the point of birth.  And they remove penalties for doctors who do not give care to abortion victims born alive.  Is there another word for watching a living, heart-beating infant on a sterile tray, and letting it die, other than infanticide?

These bills have unmasked that behind abortion is Singer’s logic, acknowledged or not.  Of course the Ben Sasse bill was voted down (the one protecting children born alive after an abortion)!  Because everyone knows the deep incongruence and absurdity of allowing a doctor to kill an organism one minute and literally the next minute being forced by law to administer life saving care to that same organism.

But, in choosing consistency, those who killed the bill also chose a chilling kind of acceptance of infanticide over and against the more popular acceptance of a woman’s right to chose pregnancy or not.  In the case of a botched abortion, all the popular battle cries remain inviolable, as the mother gets to end a pregnancy, she had the choice.  Yet if life saving care won’t be required for a breathing infant outside the womb (no matter what its prospects), it seems there is one more battle cry they missed telling us about: we want the right to a dead baby.  That this doesn’t seem the horror that it is, is only possible because personhood in this case is defined, not as viability, nor as sentience, nor as consciousness, but finally as the mother’s desire for the baby to live, or not.  If it’s inside or outside her womb, heart beating and moving, if she doesn’t want it alive, it doesn’t get to live.

The personhood argument suffers from deep, deep subjectivity.  Every line it could appeal to is arbitrary:  like the presence of brain waves, or capacity for relationship, or memory, or oxygen in the lungs or looks or heartbeat or consciousness.  The problem is any time you draw any line other than the inception of the child, you end up arguing for a right to kill people outside the womb.  That should scare all of us.

So, either human life has intrinsic value or it only has instrumental value.  If the latter, the bright red line ceases to be the anxious question of “when is a baby a person?”.  The bright red line is in reality the unquestioned, unrestricted right of a person to end pregnancies whenever and however they choose – or even, as we’ve seen with Singer, to end the lives of small children.  When that is publicly admitted, as Singer has done, the veil of moral ambiguity around abortion will lift (for most of us I pray) and this holocaust just might be mitigated or, dear God, end altogether.
Tags: Abortion, Baby, Fetus, Peter Singer, Pro-choice, Pro-life

What are Your Beliefs About Birth Control and the Right to Choose?