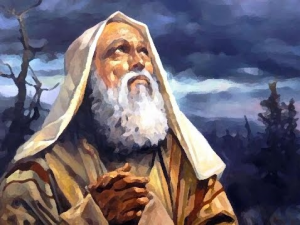 QUESTION: In Genesis, shortly after Abraham instructed Sarah to call herself merely Abe’s sister to avoid being murdered while in a foreign land, God personally showed up in the dream of the man who sought to take Sarah as his own wife. In this dream, God calls Abraham a prophet (Gen 20:7). However, to my understanding there are no recorded cases of Abraham making any prophesies.

This, of course, does not exclude prophethood from him, especially given God’s declaration, but is there a deeper or extended context to how we might understand what a prophet is? As in, someone who doesn’t merely foretell….? How should we take this statement God made about Abraham?

ANSWER: Two things to say. First, we must understand that prophesies in the Bible are not always predictions of future events. Even when they do predict the future, sometimes it is not to tell us what will inevitably happen but what MIGHT happen, if certain conditions are not met.  So for example, Jonah predicts the destruction of Nineveh, but it doesn’t come to pass because the more important feature of his prophecy, is God’s relationship with the Assyrians. He wants them to repent and turn to him in humility – which they do, and the predicted judgment does not come to pass.

It is true that in the Old Testament many prophets do predict what God’s going to do in the future. And the success of these predictions authenticates that the spokesmen speaks for God because who but God could know the future? Even in the New Testament, gifted prophets in the Church also make predictions by the power of the Holy Spirit (Acts 11:28).

However, in both the Old and New covenant periods, prophets actually spend most of their time FORTH-Telling rather than FORE-Telling. Meaning, they speak forth God’s Word boldly, revealing God’s mind, God’s heart, God’s will, God’s FEELINGS (that’s an amazing thought!) and God’s purposes in the right now, not in the future. Prophets simply receive God’s messages. So they also act as intercessors for people and nations, as God’s chosen liaison/mouthpiece (see Jeremiah 11:14, 37:3, and Elijah in James 5:17).

Under this expanded biblical definition, Abraham is certainly a prophet. He receives God’s messages all the time! (Gen 12:7; 13:14; 15:1; 18:10) He’s just not delivering them publicly to a large audience, like Jeremiah or Isaiah did.  In Abraham’s story, the author tells us the messages God gives to him, so it doesn’t look like it’s Abraham’s “prophecy” because it’s always God delivering to him, rather than Abraham delivering them to others.  But what else should we call these communiques, if they’re messages or direct promises from God?  It’s prophecy!  Abraham’s prophetic career has a different feel than the Major Prophets because, again, he’s not writing these down or delivering them like sermons to kings and peoples in courtyards, with the phrase, “thus saith the Lord!”.

All messages directly from God are prophecies nevertheless.  And the fact that we even know about them means at some point Abraham delivered all this prophetic insight to others.

Also, Abraham does intercede for nations, like other prophets do, when he prays for Sodom and Gomorrah (Gen 18).  And he speaks messages from God for people, even if it’s just his own people – the people of his own house (Gen 17:9ff) who will inherit the promises God makes.

So in both his FORTH-Telling roles and his FORE-Telling roles, Abraham qualifies as a prophet like any other.

Was Nostradamus a Prophet?

Are we living through “another” fall of the Roman Empire?

What Should I Make of Disturbing Bible Verses About Children?