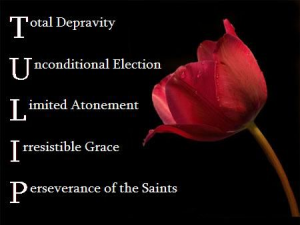 QUESTION: Where do you align with the Calvinism T.U.L.I.P. points
RESPONSE:  Well, let me first say that this is a highly disputed and sometimes contentious area of debate for Christian for hundreds of years.
AC3 doesn’t hold an official position between Calvinism and Arminianism.  This is appropriate since the Biblical data about divine power and human responsibility is so wide ranging.   Still, I do have opinions about T.U.L.I.P. and I’ll share them here.  I could say (somewhat coyly) that I agree with all 5 points if you define them a certain way.  Defined classically, however, I struggle with parts of all of them:
T – Total Depravity.  I agree that we are totally depraved, in that every part of our nature is affected by sin.  I believe there is no unfallen part of us.  But I do not believe that we are as evil as we can be or that our sin slavery means we are incapable of doing any good in our fallen state (Acts 10:4).  I also don’t accept that being “dead in sin” means a person cannot reach out for God, since Paul told unregenerate pagans that God put them where they are to seek him and reach out for Him (Acts 17:27).  The idea that we will be held accountable for our behavior and be justly condemned because of our sin is straightforward enough.  However, if this point means that our sin brokenness makes us so depraved that we can’t even reach out or even want salvation without God wanting it for us, and then to further believe that God condemns us for not wanting it or reaching out for it (the very thing we are unable to do), is, to me, tortured logically (not to mention morally) and biblically selective.  But I do believe with our sin brokenness God must help us see the light and to overcome self and satanic deception that would keep us blinded to his saving grace.  I believe God gives this help to everyone.
U – Unconditional Election.  I agree in unconditional election if we define good works as the condition of God’s choice.  God elects without respect to our good deeds; there are no good works conditions on Grace.  But I don’t accept that God elects the saved and damned without regard for the belief or faith of the individual.  This is so obvious Biblically it should go without saying (Rom 3:22).  How many verses are needed to make the case that there is clearly a condition on salvation – it’s faith!  However, the “U” classically means that God elects without regard to works or faith, but instead for no reason at all, except God’s glory.  This is deemed as fair, because all are justly condemned anyhow – if God picks him and not her that doesn’t make her condemnation less deserved.  True enough, but if a remedy is selectively applied without reason, the problem of God’s unfairness is still very real.  To see the problem you just have to imagine an accident scene where 4 drunks are dying in a car about to explode.  They all deserve their fate.  But when a Rescuer comes by, and he can save all 4 but chooses to save only 1 for no reason at all, is this Rescuer still just and fair and good?  No.  But the God revealed in Scripture is “the Rock, his works are perfect, and all his ways are just. A faithful God who does no wrong, upright and just is he.” Deut 32:4 NIV.  Putting the condition of faith on Salvation, doesn’t diminish God or his glory (as some Calvinists would claim) or constitute a “work” on our part.  Rather, it exalts God’s good character, by which he is bound, and only because of that can He be called faithful and true.
L – Limited Atonement.  I agree with limited atonement if by this we mean that the atonement will be limited in its effects.  All will not be atoned.  Yes.  I believe that universalism (the belief that all will eventually be saved) is a heresy.  Thus while God wants to reconcile ALL to himself, all will not be reconciled to him and some will be tragically shut off from God forever.  But I do not believe that Jesus died only for the elect – and again this seems to me, biblically explicit: 1 John 2:2 is clear enough.  On this point I take solace in knowing that even John Calvin wasn’t a “Calvinist,” classically speaking, since he admitted openly:

“Yet I approve of the common reading, that He alone bore the punishment of many, because the guilt of the whole world was laid upon Him. It is evident from other passages…that ‘many’ sometimes denotes ‘all’…That, then, is how our Lord Jesus bore the sins and iniquities of many. But in fact, this word ‘many’ is often as good as equivalent to ‘all’.  And indeed, our Lord Jesus was offered to all the world. For it is not speaking of three or four when it says: ‘God so loved the world, that He spared not His only Son.’…Let us not fear to come to Him in great numbers, and each one of us bring his neighbors, seeing that He is sufficient to save us all.” Sermons on Isaiah 53, pp. 136, 141-4

I – Irresistible Grace. I can agree with irresistible grace if by this we mean euphemistically that God is “irresistible”; that He is a wooing, drawing God.  If this means that no one comes to God without His explicit wooing, I agree with that too, for no one can become a Christian based on their own idea alone – God must draw them (John 6:44).  But of course, this phrase means much more than that to Calvinists.  It means that if God woos you, you will be saved, period.  And if you are not saved, then God never wooed you and never had saving intent towards you in the first place (which fits nicely with “L”).  This doctrine essentially sets up a complete determinism which takes human choice off the table.  When you say God marks a person for salvation, and that person can’t resist, it implies not only irresistible GRACE but also irresistible WRATH, since everyone not so marked has been selected for damnation.  (Though different Calvinists do make a distinction on this point.)  The strong implication is that all of this, the saving and the damning, is unilateral.  This makes humans out to be puppets and the whole redemption drama to be a pre-scripted charade.  Attempts are made to retain free will in this system but the “I” always creates an unsolvable paradox – how can I be free in any real sense, if grace is irresistible? I would rather take the biblical data at face value rather than try to cram them into a theological system.  For example, take the fact that God is not willing for any to perish (2 Peter 3:9), coupled with the fact that some will in fact perish.  The simple conclusion is that God’s saving grace can be resisted!  Jesus said to the lost, “how I longed to gather you… but you would not!”  That sounds like Jesus had a saving intent for Jerusalem that was actively and successfully resisted.  The Bible does not paint the human redemptive drama like a pre-scripted charade, but rather like a high stakes war.  The human story might have a certain final outcome, but in the meantime, options have been made available, sides are drawn, choices are made and that’s how fates are sealed.  Not the other way around.
P – Perseverance of the Saints.  I agree with the “P” in that salvation is perfectly secure for all who trust in Christ; that God carries us to heaven by his grace and power and no one, not any trouble, not even our temporal sin can separate us from his love (Romans 8).  But I don’t believe that trust in Christ eliminates your ability to later reject that same Christ.  If it does, then why was Hebrews written?  The whole letter is appealing to Christians to persevere.  If all saints persevere always, because of God’s decree, then this whole letter is absurd.  Why warn those who are going to persevere in their faith (because God will make them persevere) of the need to persevere in their faith?  Why warn true believers (Heb 6:1-6 – these are not people who were “not real Christians in the first place”) unless it’s possible for some who claim Christ to later turn and reject him?  Why does Jesus tell the parable of the sower who sows some seeds that sprout and then die?  We must assume that some Christians just won’t persevere, like two specifically named in the Bible, Hymenaus and Alexander, who Paul says, “shipwrecked their faith”.  The Calvinist must claim that they could only fall away because they weren’t really true believers.  But I believe it was John Wesley who said, “you can’t wreck a ship you’re not sailing on.”
The “P” in TULIP is the one point that many believers of any persuasion usually agree with because of its comforting appeal.  I don’t begrudge them their hope in God’s sustaining power – “my sheep know my voice – no one can snatch them out of my hand”.  However, I note that whatever comfort is gained by “P” in this system, is often lost by “U”.  That is, how can I unerringly know that I’m one of the unconditionally chosen elect who always perseveres?  I cannot know since it’s God’s choice and none of my own.  I may think I believe, but maybe God didn’t pick me, and I’m self-deceived.  This anxiety marks some Calvinists I know.
But if you ever worry that you’re not one of the elect, this should be a self-correcting feeling.  No sooner have you felt it, than you have been assured that you are in fact, Elect, since you do believe in Christ, and his promise for those who believe is sure.  Only those never concerned with the question should worry about the question, since by their indifference to Christ they show they do not belong to Him.
I should repeat that I don’t make a hard stand about TULIP at AC3, and we have plenty o’ Calvinists among us, and I have many who are close friends.  My concerns are less theoretical than they are practical, especially in more radical variety of TULIP believers (AKA hyper Calvinists) who:
Tags: Calvin, Calvinism, Faith, Free Will, Predestination, Salvation, Salvation by Grace, TULIP

Is Predestination Contrary to Free Will?