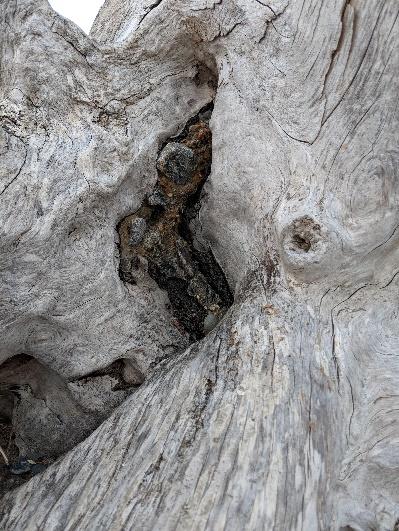 Have you ever been afraid? I don’t mean the jump back scream because something jumped out at you afraid. I mean the hunker down, incapable of taking any action kind of afraid.  This fear can come from a whole host of sources:  Changing jobs or positions, moving, looking at the piling up bills, or facing conflict.  While there are times of danger where fear is a natural and proper response, more common is the fear that is simply false and debilitating.

Recently I came across a piece of driftwood at a local beach that served as an image for me of what happens when this false “fear” (False Evidence Appearing Real) is allowed to go unchecked.  In the roots of the downed tree was an affixed rock about the size of a fist.  When I say affixed, I mean so stuck that after years of drifting in water and baking on the beach it was still unmovable.  This is what these false fears can do to us.  We cling so firm to our safety that we too become stuck and immovable.  While in these times of fear we can make the best excuses, we deny that we are stuck, and even worse, look to blame others or God.

Gideon was stuck in fear.  He was so afraid of the Midianite raiders that he was threshing wheat in a winepress.  The task of threshing wheat is meant to be done in the wind where the chaff is separated and blown away, so we see Gideon was in hiding.  He wasn’t the only one; his whole people, the Israelites, were stuck.  Stuck in their fear of the invaders was only a superficial fear.  It is not that the invaders were not a real threat, but they were not truly the source.  The real source was that God had given the Israelites what they wanted; to be left alone.

While working in the winepress, “The angel of the Lord appeared to Gideon, he said ‘The Lord is with you, mighty warrior’” (Judges 6:12 NIV).  Gideon does exactly what we usually do; he challenges the angel. “If the Lord is with us, why has this happened to us? Where are all his wonders…” (Judges 6:13) and so on.  Gideon, like us, wants to put the blame on anyone other than himself, even God if he must.  He even goes so far to accuse God of “abandoning” them, as if to say, ‘why don’t you do something Lord?’  Gideon was stuck, he did not like it, but he felt safe and was more willing to defend the perceived safety than to deal with the real issue.

That is when God turns the mirror on Gideon, “Go in the strength you have and save Israel…. Am I not sending you” (Judges 6:14).  This is not enough for Gideon though, and first makes excuses “Who am I Lord?” and “My clan is too small and weak” (Paraphrase Judges 6:15).  Even when God promises: “I will be with you,” Gideon still wants more proof, testing God time and time again. “Will you stay here while I go get a food offering?” (Judges 6:17-18), then again later testing the Lord with fleece and dew; not once but twice (Judges 6:36-39), as if to say, “prove it”.

How many times do we do what Gideon does?  We blame other people, outside circumstances, and even God for the messes we have gotten ourselves into.  We become so embedded in our perceived safe place, we refuse to deal with the thing we fear so we can have real peace and safety.  Is there any excuse we can think up that God cannot handle?  There is nothing we have done, nothing we can do, no place we can go, that God cannot save us from ourselves or the things we fear. “If God is for us what can stand against us?” (Romans 8:31).

In close, I ask again what is it you are fearing so much that you are, like the rock in the tree roots, stuck in a bad place that is just rotting away.  What excuses are keeping you there?  Who are you blaming? Recognize now that it is our job to get up and get going and trust that God is with us and will strengthen us. Now, I have a pile of bills to face and some career choices to make, but with God’s help I know I will be strong enough.

AC3 Position on Women In Leadership