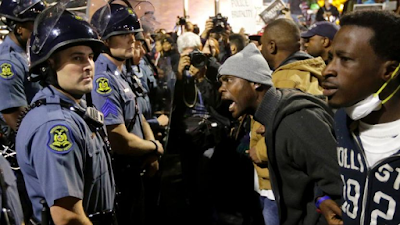 It’s unanimous.  In light of the disputed shootings of blacks by police, caught on video and debated on social media, combined with the subsequent protests and finally the retributive police assassinations, race relations are worse now than they have been in a long time.  In light of that sharp decline, I thought, “race degradations”.  But just as I thought I might be coining my own clever term for the current lack of ebony and ivory harmony, I came to realize that I wasn’t the first to use those words together.

Flip the two words around and you get: “Degraded Race” which happens to be a term they used a lot in Early America.  Here’s someone editorializing in a local newspaper about the use of the phrase “Degraded Race”:

“Our sensibilities are often offended by the above, too frequent and misapplied phrase.  Nothing is more common than for the minister, the lawyer, the demagogue and the philanthropist, when speaking of colored people, to say, ‘Degraded race’ – ‘Degraded Nation’.  God has made but one race of men, and all Americans within the United Sates both white and colored, constitute one nation.  The degradation of any particular part of whom, is rather relative than real, virtue, in the sight of God, exalts – its absence degrades and debases.  When we maintain a conscience void of offense, toward God and toward man; we call no one ‘master’, save the adorable Jesus.”

That was written in on October 27, 1838.  About 30 years before the Emancipation Proclamation of Abraham Lincoln.  And what it shows is that Christians have always had at their fingertips vast spiritual and intellectual resources to combat the insidious evil of racism.

3 days later, after his lifelong struggle against the racist ideology aback of slavery ended, Wilberforce died.  The impulse for his crusade?  In his own words:

“In the Scripture, no national crime is condemned so frequently and few so strongly as oppression and cruelty, and the not using our best endeavors to deliver our fellow-creatures from them.” – William Wilberforce

“In the Scripture”.  Scripture and the Gospel it reveals, were his inspiration and impulse.  Yes, there has never been a greater defeater for racism than the Bible.  Say that again, slowly and repeatedly, until like a cleansing shower, the thought washes you clean of these slanders:  “Christians were spurred by the Bible to sustain slavery”, “Christians are encouraged to be racists by the Bible.”
Whatever biblical arguments the slave traders may have used, anyone can see (even then) that they were very bad exegetes (See my blog about the Bible and slavery here).  For they did what bad bible students always do:  Import into the text your own desires and prejudices.
Of course this is true, since they completely ignored the most obvious truth revealed in the Bible about race, namely that we are all long lost cousins.  Literally!  Not figuratively, not esoterically, not in a Hallmark-gift-card kind of way, but actually and genetically related.
Besides the slavers, early biologists also ignored this.  Many, like Agassiz, maintained that God must have created the races separately many others said they evolved separately.  Some, like Darwin used the term often, “degraded races” and (while himself an abolitionist) thought blacks less evolved.  Meanwhile, the Bible’s narrative boringly remained unchanged by these ‘modern’ sentiments:

The Bible said it first: there is only one race, the Human Race.  It took 60 more years of scientific progress to reveal that the human race is so young, and so related, that outside your immediate family, you are just as likely to find a genetic match for an organ donor in India as in Indiana.  We interbred easily.  We are all – shock! – the same species!

How could you read the bible and miss the implications of the narratives of Adam and Noah?  Namely, the brotherhood of all human beings?  The fundamental equality of our special, Image-Bearing person-hood before God?  The answer is pride and greed, of course.  But let’s not suppose the slavers missed it because it was too obscure, or not repeated or clear enough.
Right from Israel’s inception the people of God are told to welcome the ethnic outsider because of the golden rule:

Ex 23:9 “You must not oppress a foreign resident; you yourselves know how it feels to be a foreigner because you were foreigners in the land of Egypt.”

And by the time the gospel of Jesus begins to be preached to “every nation under heaven” the multi-ethnic call of racial unity under the grace of Jesus is a veritable trumpet blast in scripture after scripture:

Col 3:11 “Here [in the Church] there is not Greek and Jew, circumcision and uncircumcision, barbarian, Scythian, slave and free; but Christ is all and in all!”

Eph 2:11-19 “For He is our peace, who made both groups one and tore down the dividing wall of hostility. …so that He might create in Himself one new man from the two, resulting in peace.”

Oh, the beauty of this vision!  The Church is the answer to racism, for in the Church, by means of Christ’s sacrifice, he tears down dividing walls of racial hostility.  Your ethnic pride and looks may remain, but your old in-group loyalty dissolves in baptism waters, replaced with your new name. “Here” we are His family.
In Christ, I learn to see a person, not through the lenses of historical divisions, broad abuses against my “kind” or ridiculous physical or ethnic stereotypes, but rather as a potential member of my redeemed family.
In Christ, we learn to judge a man, as MLK instructed, “By the content of her character, not the color of her skin.”  The 1837 Blogger said as much, “virtue, in the sight of God, exalts – its absence degrades and debases”.  Notice degradation is still possible.  But what degrades me, he claims, is not my ethnicity, not the amount of melanin in my skin, nor my cultural baggage – it’s the lack of virtue in my life.
When you look at the recent racial disharmony in America, no one is saying the most obvious thing.  It comes back to a lack of virtue.  Our country is having a crisis of character before it’s having a race crisis.  If there are “bad shoots” by policemen, caught on video, and this is proved by due process, what was aback such tragedy?  Maybe fear, maybe lack of good training, but almost certainly, it was a lack of virtue.  A lack of character.  A lack of courage or humility.  Fear.  Or worse, a seething hatred built on prejudice.  What else would cause you to shoot an unarmed man running away from you?
If suspects are increasingly challenging authority, resisting arrest, what’s behind that?  It might be fear of abuse, or the fight or flight instinct, but probably it starts with a lack of virtue.  A lack of humility.  A lack of law abiding goodness or penitent submissiveness when caught.  What else would cause you to fight an officer for his weapon, discharge it in his vehicle, try to run away and then charge him?
With virtue (character content) in mind and not race, it’s good to remember that we don’t waste our time chasing boogeymen, non-specific charges against persons or the culture or groups.  If there’s a racist cop for example, we prove it first, and refuse to justify and let justice run its course.  If there’s an unequally applied law, we name the specific law, and agitate for reform.  Painting with a bigger brush than that (all cops are racist, all laws are racist), is inherently as prejudiced as the very thing we’re fighting.
Maybe more importantly for small people like us, is not about changing national debates.  It’s about showing off our Gospel inclusiveness by engaging in regular conversations across racial lines, asking questions, sharing life, seeking to understand; and about challenging the not so subtle racism of peers and family members, both the “you know how those people are” racism, and the “one race is inherently more racist” racism. 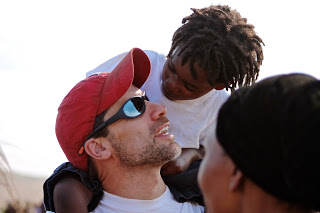 Here’s how this translates for me:  In private relationships, everyone, no matter your race, is a potential brother in my spiritual family and so I’m your friend, automatically.  I may not “get” you, you may not “get” me – I don’t care.  You’re a son of Adam, you bear Imago Dei – you are a holy thing, and virtue exalts you.  And the requirements of virtue are written in hard Stone, not in soft skin or the amount of melanin it contains.

So in a world of increasing racial degradation, I’ve decided that only the absence of virtue degrades, and only in individuals, myself or others – there are no “degraded races” – for the Bible tells me so.