Rick came up with that title.

We’ve been talking about this kind of thing off and on for a while now. I say this kind of thing because it would not be fair to characterize all our conversations (or even most of them) in such stark terms. But maybe because of the frequency or the intensity of these kinds of subjects popping up in our weekly meetings, it has become that stark.

The tenor of the conversation has mirrored the subject: It’s been like creeping awareness; like slowly rising flood waters. But what does it mean? What is to be done, if anything? At what point does the situation change from a “really rainy day” to a “flood”? 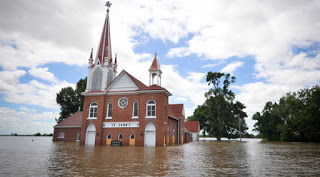 Is it when the water reaches a predetermined (but ultimately arbitrary) depth?

Is it when it spills over the threshold of your house?

Is it when you can no longer drive your car through the water or when property is being damaged?

I’ve been watching the water rise for years now. But it’s tricky to determine exactly how dangerous it is because there are so few fixed points of reference. Everything from politics to art, technology and philosophy have been moved by the rising water. I find myself feeling a deep, growing anxiety: “the water seems like it’s getting deeper…I can feel it…” but when I look to the measuring sticks that the world provides – they seem to be rising too, sometimes it seems, in a direct effort to maintain the illusion that the water is in fact NOT rising.

You’ve probably heard it before: We have more free time, but we’re more busy, more anti-depressants but  we’re more depressed, we have more freedom but we feel oppressed, more of us have access to more money, but we are deeper in debt…children are suffering in greater and greater numbers, homelessness, divorce, child abuse, malnutrition, crime, hate, bigotry and greed remain largely unchanged or are on the rise despite the best socio-political engineering that Washington and Hollywood can churn out. It appears that the absolute bestAmerica can muster in this election cycle is a choice between buffoonery and cronyism or varying degrees of fascism disguised as either “progressive” or “traditional values”.

What’s a church to do?

“Trying harder” may be necessary but it’s not going to stop the rising water. In some of these cases we’re leading the charge in reducing the suffering caused by these evils. In some cases – we’re even eliminating the evils but only on the scale of one human or maybe a family or small group at a time…so there’s no way we can keep pace with an exploding population. In addition, it has never been the church’s mandate to deploy change on that scale.

In other cases, we’re simply in there with everyone else opening up spigots, fire hydrants and breaching dikes. In other words: adding to the problem. Sure, those of us who become aware can do what we can to reduce our contribution but the changes we make will, in the big picture, only be emblematic. And even if every person who claimed to be a follower of Jesus Christ suddenly gained the knowledge and motivation to stop adding to these problems, how many would have the means? Can the starving Christian peasant in Brazil simply stop feeding his family by clearing the rain forest? Can the Pakistani or Syrian Christian simply move to safety or surrender his loved ones to the mobs? Can the American Christian eliminate ALL personal contributions to the cancer-like growth of a selfish, consumerist empire?

The flood is coming.

And we’re not going to stop it.

So the question becomes, “What DO we do?”

Many of our Christian cousins chose to separate from the flooding world hundreds of years ago. Hutterite, Mennonite, Amish and others embraced the Biblical admonitions compiled in 2 Corinthians chapter 6:14-17

17 So, “Come out from among them
and be separate,
says the Lord.
Do not touch anything that is not pure and ‘clean.’
Then I will receive you.”

The issue here, like so many issues we encounter as a church, has to do with majoring on one portion of scripture without taking ALL of it in context.This passage is compelling, and it is clear that we are to live differently from the culture around us. But there are countless passages that command us to live in PROXIMITY to that culture too!

We simply cannot establish “Christian ghettos” and still claim to be the church. We cannot build life boats and then row away singing our favorite “Third Day” songs while our neighbors drown.

So are we just supposed to drown along with everyone else?

You see the conundrum right?

But, you may ask why the question is coming up now. Hasn’t it always been a conundrum?

Yes. But the scope of the conundrum has never been this huge. Every generation of Christian from literally the FIRST has found itself asking, “Is this it? Is this the end that Jesus predicted and should I be preparing for it?” But in all cases since about the 3rd century, the question has been asked from the position of socio-political power. For the last 1700 years, the church has either been the power structure that drives change, or it has been a partner to it. The church (for good or for ill) has been asking, “is the ship sinking?” from the helm. Over the last 150 years, we are asking the same old question – but we’re not at the helm anymore.

…right there…there is a partial answer to the question: We have already moved (or we have BEEN moved) from a former place of cultural authority. We’re already separating.

Maybe the issue is what we measure movement against. Movement is relative after all.

Perhaps the best question, the eternal question, the question that Jesus Christ put to us 2000 years ago should be: “Are you moving toward The Kingdom of God?”

If the answer is yes, then your relative position to the culture is moot.

Not to overstate it, but one might say, “culture be damned.”