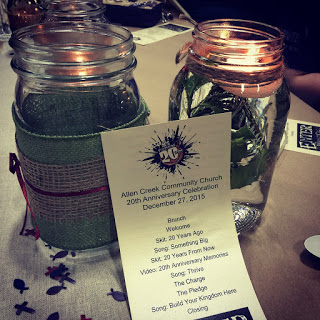 350 brunch attendees…50 children…20 childcare volunteers…320 mason jars…wood and burlap all over the place…months of prep. The AC3 20th anniversary celebration that took place in December was a major undertaking, and I felt called to accept the challenge after attending AC3 for fewer than five months. I enjoy event planning, but it had never been on this large a scale, and for a group of people that I was so unfamiliar with.

Why did I decide to take on this project on when I wasn’t even super familiar with the church?  What did I get myself into?  I really hope that I do not fail or let anyone down. These were all thoughts that went through my mind numerous times. I prayed for clarity and for the event to go as smooth as possible. And while there were a couple of little snags, they were so minor that unless you knew what the original plan for something was, you would never know it was not something in the vision.

A month has passed, and I consider the banquet to be a major success. I had a few team members that helped in huge ways and to whom I am so thankful. We were able to take a middle school gym and disguise it enough that we could focus on the celebration and not the basketball hoops above our heads. And what a celebration it was!

The banquet consisted of many ideas coming together to not only celebrate the church in a way that had not been done before, but also to glorify God in a way that is not seen very often because of the scale of the event. Everything from food to decorations was planned deliberately with the theme of nature, sustainability, and authenticity that AC3 strives towards every day.  Burlap and brown paper covered the tables to give a rustic feel.  Mason jars were wrapped in burlap and twine, with ribbon thrown in to give some color. Bins of fresh cut holly and fir were brought it as accents for floating candles. All of the plates, cups, and flatware were compostable in order to keep the banquet as environmentally responsible as possible. Included in our delicious brunch were dairy-free and gluten-free options to appeal to those with dietary needs and restrictions. Every detail was thought out and planned for.  I tend to overthink scenarios, and while there were a couple of things that came up that nobody had thought of, we were able to work as a team and quickly take care of any little issues that arose.

We were able to have fun and rejoice in AC3 and how God has used our church to change so many lives over 20 years.  Along with our regular attendees, there were banquet attendees that came from out of town.  There were also those who grew up at AC3 and no longer attend, but who still love AC3 and wanted to celebrate its successes.  It was like a reunion and anniversary party rolled into one! I can only imagine the joy that God had that day over his children coming together in honor of a church that has touched so many lives and is still going strong after 20 years.

Twenty years is nothing to scoff at. From a church that was a handful of a people worshiping in a living room, to 200-300 people on any given weekend, it is a huge achievement that deserved to be honored. And while we were at a different building–which happened to be one of the first meeting sites of AC3–the banquet had the same feel of one of our “normal” weekend services. There was music, and a message delivered by Rick, a video put together by Nate Crain, and a drama.  The theme happened to be perseverance this time–where we have come from the past 20 years, and what we hope to do in the next 20 years–and what an amazing message it was.  This time, it was just done on a slightly larger scale.

The Armor of God