WARNING:  stretched application of bible verse ahead.  Now, I’m normally a stickler for not taking a verse out of context to make it say something it isn’t saying.   And, in this case, I still think my conclusion fits the principle set forward by Jesus, but I might be the only one who would make the connection I made yesterday.

OK, so enough hedging, get to the point!

Yesterday (AKA, Black Monday) I was, as were most of you, lost in a post Superbowl coma, suffering from a sort of PTSD of the sports fan variety.  We lost the game.  I mean, we HAD the game won, handed to us on a silver platter and then, as if it were too simple to just take the game so offered up, (on the one yard line with the best running back in the NFL in our backfield), we handed the trophy back and said, “first, we’d like to up the level of difficulty, if you don’t mind.”

What could go wrong? 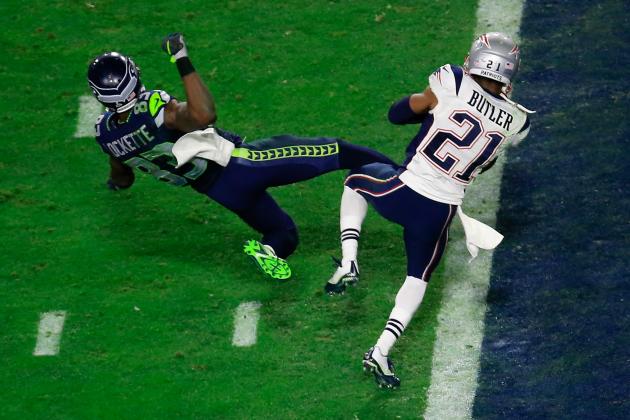 For the next 12 hours of consciousness, which stretched well into Monday, I couldn’t help returning to the game, and saying under my breath, “just run the ball”.  Over and over.  Each time with an emphasis on a different word.  JUST run the ball!  Just RUN the ball!  Just run the BALL!!  Remember the Dolphin placekicker, Ray Finkle, from Ace Ventura?  He/she (long story, rent the movie) went crazy after losing the Superbowl on a botched field goal, and wrote obsessively, “laces out, Dan!” – over and over and over.

(Side note:  if you had several reasons to think it was destiny for the Seahawks to win based on the miraculous plays leading up to the end, I have one more.  During the last quarter – this is no lie, I swear on the legacy of Steve Largent – I opened up the Bible app on my phone and started to read. Why you ask?  No, not trying to be holy, not trying to invoke the Almighty into an athletic contest of overpaid superstars.  No, I was just trying to be less caught up (read: angry) in the fact that we were blowing a 10 point lead in the 4th quarter.  This actually was working, so I kept reading between plays, even as we started mounting a drive with time expiring.  This is what I read [again, I swear on the grave of Chuck Knox this happened]: “with man this is impossible, but with God all things are possible”.  Huh.  Just then, I look up and see Wilson cock his arm and unload.  Deep.  Kearse jumps, he bobbles, he falls, but before the ball can land, he somehow cradles the magic bean between his legs, tips it up to himself, rolls, and finally, miraculously, secures it – 1st and goal at the 5!  What!?!?

Things that are not humanly possible are happening – again!  I mention this simply to underline how the interception 2 plays later hit me like a Kenworth.)

On Monday morning, I’m back to my routine, but on the way in to work, no sports radio in the car – the normal therapy won’t help this patient – plus our recent media fast made it easier for me to turn off the chatter.  I had a meeting, did some reading, email, and off to the Y to burn off steam and play some ball.  Afterwards I sit down to rest and a guy I’ve been getting to know sits next to me.  He knows I’m a pastor.  And we’d had a couple of conversations but nothing significant.

Suddenly, he starts to pepper me with questions.  “What do you think happens to you right after you die?”  “Who goes to heaven?”  “Do people who go to hell, somehow choose that?”  “Are we living near the end of time?”  At about 5 minutes in, I’m realizing God has put me serendipitously into a high stakes, high importance conversation that I did not plan for or see coming.  But I loved every minute of it.  Every word of mine, bathed in a silent prayer.  Every question I returned with a question, seeking to know this friend, and to give a reasonable answer for my hope.  When it was done, I felt I had been an instrument in that man’s spiritual journey, just one of many I’m sure, but one link in his Journey to Christ.

OK, so now comes the stretch application of a Bible verse (oh, you thought it was the “with God all things are possible” thing?  No, not going there…).  As I drove home, mood renewed, John 4:34 jumped into my mind.  “My food,” Jesus said, “is to do the will of the One who sent me.”  You see, just before that, the disciples had left Jesus to look for food.  The thing everyone wants and needs.  The thing we crave.  But while they were gone, Jesus was busy in a high stakes conversation that lead to the eternal destiny of one woman and her whole village being changed.  And so when the disciples returned with food, Jesus didn’t seem interested in it.  He says to them, “I have a food you know nothing about” (vs 32).  So now they think maybe he got food somewhere else.

No, says Jesus, my nourishment, my prime sense of feeling at peace and satisfied, complete and full and joyful is when the Father is using me!  I just see him beaming as he said it, relishing being a part of what REALLY matters.

A Superbowl victory feels like it matters; Feels like bread to a starving man.  Just look at how we reacted last year.  We went bonkers, like we had been starving; a 40 year drought in Seahawk nation – when suddenly, miraculously food fell from the sky.  Sustenance.  What the nutty sports fan had been craving for so long was finally here.

But then there’s a food we “know nothing about”, a better food than sports fan ego-enhancement.  (Let’s face it, what else is on the line as a fan?)  It’s the food of knowing we are doing God’s work and God’s will.  The thrill of being a part of the victorious march forward of Christ’s kingdom, the seeking and saving of lost things.  That’s food that satisfies in a whole different way.  I tasted that food again on Monday and it was better, I say, than the food of football victory.

Just a little something to help keep perspective, Seahawks fans.
But next time, Carroll, for the love of all that is holy, RUN. THE. BALL!
Tags: God's will, Jermaine Kearse, Jesus, John 4, Pete Carroll, Seahawks, Superbowl

How To Talk to A Non-Christian about Hell

The Story, From the Inside