Like many Christians these days, I am bothered by our culture of selfishness, materialism and busyness. The Christmas season seems to be the summit of all three of these corrupted values.

…the season Christians chose to celebrate the arrival of The Messiah, advocate of poverty, simplicity and peace, is now the the season to relish their opposites.

Ok…we’ve all heard the sermons on this disease. Every church pageant and newsletter article in the month of December is focused on finding the “true meaning of Christmas”..right? Heck – even Hollywood regularly preaches to us to about “family”, “servanthood”, “peace” and “joy”  as they advertise the latest bloodthirsty video game (on sale to your 9 year old with a coupon from their “Happy Meal”)

Simply put, the Jesse Tree is an artistic representation of the lineage of Jesus. It refers to Jesse, King David’s Father and direct ancestor of Jesus (see Luke 3 and Matthew 1). In fact the original idea of referring to one’s ancestors as a  “family tree”comes  from the Bible: Isaiah 11, where the prophecy of Messiah coming from Jesse’s line is referred to like this:

A shoot will come up from the stump of Jesse;

from his roots a Branch will bear fruit.

The Spirit of the Lord will rest on him—

the Spirit of wisdom and of understanding,

the Spirit of the knowledge and fear of the Lord—

and he will delight in the fear of the Lord.

Putting Jesus’ family tree into art really caught on in Medieval times when the gospel was spreading throughout Europe amongst illiterate masses of people. Art was used to tell Bible stories. It’s why we see so many stained glass windows, frescos and tapestries depicting Biblical scenes. The Jesse tree was a common image used to teach of Jesus Royal lineage.

Over the years it has become a tradition in some Christian streams to make a Jesse Tree in the days leading up to Christmas. Some folks set up a small tree inside their homes and decorate it with ornaments representing key descendents in Jesus’ family. Others expand the idea and decorate a tree (or a window, or whatever) with images to remind of ALL of Christian history, beginning….well at the beginning. It serves as a means of focusing attention on Messiah instead of Material, on History instead of Histrionics and on the Gospel instead of Getting. 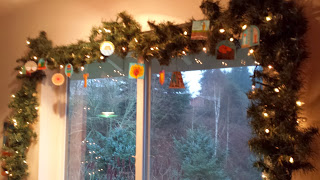 I’ve been aware of the Jesse Tree tradition for several years now, but this year I decided to engage with it. The Northumbria Community (a Christian monastic community in N.E. England I am affiliated with) produces a Jesse Tree “craft”, meant for families with smaller kids, I think, but no less meaningful for grown ups I have found. Beginning on December 1st, and on each day until the 31st, I read several Bible passages and a brief reflection from a booklet, color in a paper “ornament” representing the topic for that day, and then decorate the “tree” with those ornaments. The first day begins with the Creation itself, and each successive day builds the anticipation to the arrival of the Christ Child on the 25th; reminding me of many key points in Biblical history along the way.

The truth is, I have found it much easier to resist participating in the junk that EVERYONE says is wrong with Christmas (but does little to change) because I picked up a daily ritual which actually focuses my attention elsewhere, gives me something to touch, to see, to contemplate.

This version of the Jesse Tree doesn’t stop with the Baby Jesus, However. It continues through his growth, ministry, death, resurrection and Great Commission: the very top of the Jesse Tree reached on New Year’s Eve, December 31st: the next day begins a new year, and a new opportunity for me to live up to the family name.

The ONE in me…

Is Christmas pagan, and therefore wrong to celebrate?