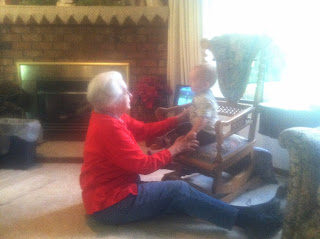 My son and I have tea with my ninety two year old Grandma, his great grandma, every Wednesday afternoon. It has become a time that we cherish, Crosby adores Grandma Helen and my Grandpa Chuck and they return that adoration two fold. When Grandpa and the boy go down for their naps, Grandma and I have a cup of tea and great conversation. Her wisdom and faith amaze me every time I talk with her.

One afternoon, several weeks ago Grandma told me a story about her past that I wanted to pass on to you. Grandma was very involved in her church and in ministry when her children and body were younger. She was a deaconess, a women’s ministry leader and a prayer warrior. As part of a CMA (Christian Missionary Alliance) church, she was asked to lead a prayer time at a meeting of all the churches in the area. This was a meeting of hundreds of people and my little 5’2″ Grandma Helen took her charge very seriously, she spent weeks in prayer, preparing what she would say. 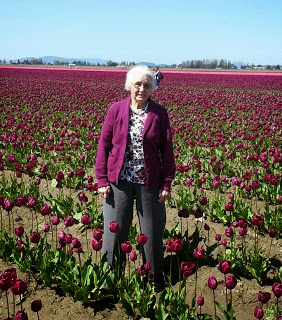 She had drawn up two drafts that she really like but both were quite different, and she couldn’t decide which one she would use. She debated all the way up to the morning of the conference. She decided she’d bring both drafts and make a decision on which one she’d use when she got there. When they arrived she withdrew into a lower room of the church to go over her speech for a final time and decide which one to use. However when she went to pull out her papers they were nowhere to be found. She realized she had left them at home. Minutes before going on stage in front of hundreds of people and she had nothing. She prayed to the Lord that he would give her the words. She had faith that He knew what she should say and how the prayer time should be led. And that is exactly what He did, he came through and the prayer time went off without a hitch. Afterwards many people came up to her and thanked her for her words. The ladies she carpooled with talked about it most of the way home and my Grandma gave credit where credit was due.

After the story was finished, Grandma looked at me with eyes full of wisdom only a 92-year-old woman can have. She said “Sometimes God has to push us back into a corner so that he can take control.” That one sentence has been on my mind for weeks. We get so caught up in what we’re doing for the kingdom; we don’t let God into our plan. We forget whose kingdom it is. We make decisions, we jump on huge ministry opportunities, or we take a stand on something we feel strongly about. So God waits, he waits for us to see him, to NEED him. Then he steps in and shows us that he really has control, that there is a reason we asked him to be Lord of our life. 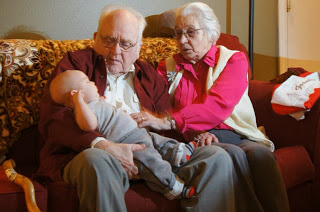 I have seen God show up in our church in the last several weeks, in amazing ways. “Christmas miracles” as we called it back stage this weekend. He has fixed things when they were broken beyond repair. He has provided for us in a time when we felt poor. He has given strength to us in a time that we felt weak. He has been there for us through trials, even if we can’t see Him in the darkness. But AC3, I think maybe, maybe He had to push us into a corner first so He could show up.

Emmanuel: God with us.

What are Your Beliefs About Birth Control and the Right to Choose?