The Making of a Champion…

The Seattle Seahawks are on the best run in the history of the franchise on the field. They haven’t lost a home game in the past two seasons and are one win away from locking up home field advantage throughout the playoffs.

I’m here to argue that they’re on an even better run, off of the field.

Everything about this team, on and off the field starts with Russell Wilson. The quarterback of the Seahawks has defied odds his entire life to get where he is right now, and where he is right now is among the best players in all of the NFL. He’s breaking all time records in his first two seasons and has never lost in the confines of Centurylink Field in Seattle.

He’s quickly become as beloved of a figure as there ever has been in Seattle sports history, and he’s doing it while wearing his faith and his heart on display for the world to see. He’s not afraid to show who he is, he’s outward in his love of Jesus and is quick to give thanks and all of the glory to God for every blessing he has.

Seattle and surrounding areas have the smallest amount of Christians per capita in the United States and I’ve witnessed personally some real animosity coming from people in our region directed at Christianity. Needless to say, our region is in need of some Christian leadership, some bold Christian leadership led by real love of our neighbors and by men like Russell who can really make a difference.

Russell Wilson is the embodiment of a leader, his character sometimes nets him the mantra of being a robot, that he’s programmed to be a man of integrity. A man who loves his neighbor unconditionally, a man who embraces the idea of greatness and gives the glory for all of his accomplishments to God. The quote below is from Russell Wilson last January, at a press conference before the Seahawks playoff game against the Falcons.

“It’s an unbelievable opportunity. As some of you may know, it’s kind of ironic I ended up here (Seattle) because I put all the teams in a hat. I told my wife, I’m not normally like this. But I put all the teams in a hat, and the one team I pulled out was the Seattle Seahawks. I’m not sure if God or my Dad or somebody had something to do with that. But just to be here is a great opportunity. I’m trying to take advantage of every opportunity I get. You’ve got to cherish these moments.”

Asked what he thought when he was drafted by the Seahawks after he pulled their name out of the hat, Wilson said, “Just I knew I was in the right place at the right time. God’s always done that for me in my life. It’s amazing how that works out. The biggest thing is continue to work and have that work ethic and determination to be great, and don’t shy away from it at all.”

Literally gives me chills to read this looking back on the past two years and what this kid has accomplished. He also spends every single Tuesday at Seattle Children’s Hospital, brightening the days of little ones that can always use a smile, he never waivers from his efforts to give back to this community and he never waivers in his efforts to make sure the world knows that the glory belongs to God, not to Russell Wilson. 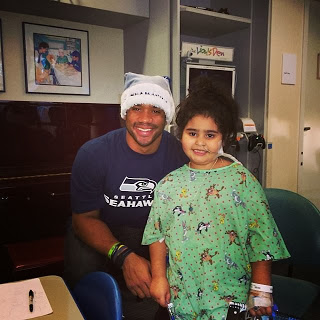 In early October, 2013, a group of Seahawks including our star QB started to publicize something they were calling “The Making of a Champion”. I along with thousands of other Seahawks fans were obviously intrigued as with conventional thinking, we’ve never been “champions” here in Seattle and sports fans have been awaiting that precious moment for a long, long time.

What ensued was far more than this follower of Christ could have imagined. The Making of a Champion was much more than a short film about football, it was a story of these men, leaders in our community and insights in to their personal walks with Jesus. These men put themselves out there, in the middle of a broken world, a broken city with broken culture and declared that they love Jesus. Courage and conviction in every one of their eyes and in their hearts. They explained what led them to God and that even though they’d obtained their worldly goals by playing or coaching in the NFL, that the glory is God’s for every gift that He’s given them.

Where they go from here?

As for the Seahawks, they’re on the verge of the best season in franchise history and have the best record in the NFL with the playoffs in just a few short weeks. To say that I’m excited about all of that would be an understatement, I’m equally excited to see what this group of champions will do in the off season in our local communities and our local churches.

You can go to their webpage for more information on what they’ve got going on or connect with them on your favorite social media network.

AC3 VB8 How to Wreck Your Life In 3 Easy Steps